More comedy – this time from Labour. It announces its manifesto this morning.

Labour says it will guarantee that each of its policies will be fully funded and require no additional borrowing, as it launches its manifesto on Monday. Leader Ed Miliband will rule out a “shopping list of spending policies” and promise a Labour government would cut the deficit every year. The Conservatives would go on a “reckless spending spree”, he will say.

Yes I am sure that is what he will say but perhaps its worth recall this message left on the Ministerial deal by an outgoing Labour Minister, Liam Byrne, in 2010. 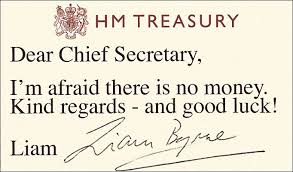 What amazes me is how anyone could be so gullible, so stupid, as to believe this snake oil from Miliband. According to the leanest poll, around a third of the UK electorate will do so. Proof that democracy is troublesome.