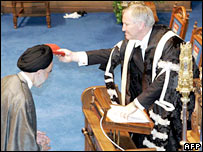 I wonder what you make of the news that former Iranian President Mohammad Khatami has received an honourary degree from St. Andrew’s University in Scotland? This BBC article fairly gushes warm praise on the erstwhile Iranian leader..

He cut a modest figure in the grey robes and black turban of a Shiite cleric. A small, bearded man, smiling at all the attention amid the gowns and mortar boards and applause in the Younger Hall at the university.

I was glad to see that at least some people had the guts to protest at the award being given to this "moderate" "reformist" – as the MSM likes to think of Khatami. Here’s a quote from Khatami from 2000..

Moderate and reformist – a good guy, right? Wonder how long before Ahmadinejad gets an invite?