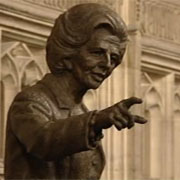 Margaret Thatcher made a brief return to Parliament today to witness the unveiling of a statue in her honour. Her image joins Lloyd George, Attlee and Churchill in the lobby of the Commons.

“I might have preferred iron, but bronze will do. It won’t rust, and this time I hope the head will stay on” she quipped, referring to the decapitation of a previous statue of her.  Perhaps the towering figure of Mrs T will remind today’s tories of what a politician with conviction is capable of achieving.

22 thoughts on “Maggie’s back … sadly just for the day”