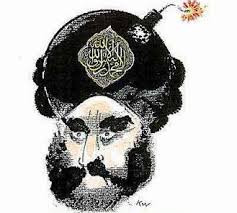 There is the political apology. “I am sorry if you are offended by what I said”. This is another way of not saying sorry! Then there is the apology issued by a leading Danish newspaper to Muslims.

Politiken was accused of betraying the freedom of the press after breaking ranks with its rivals to offer an apology to Muslims for publishing a cartoon depicting the prophet Muhammad with a bomb-shaped turban.

Politiken issued the apology after settling with a Saudi lawyer representing eight Muslim groups that complained after the cartoon was reprinted by 11 Danish papers in solidarity with the cartoonist Kurt Westergaard, who received death threats last year. Outrage at the move was led by Denmark’s Prime Minister and by Mr Westergaard, 74, who survived an alleged assassination attempt by an Islamic axeman at his home last month. Politiken responded that it was apologising for the offence caused, not the decision to publish, in an attempt to reduce tensions with the Muslim world.

I think Politiken should be ashamed of itself for expressing an opinion. This is the slow road to dhimmitude. I entirely sympathise with Mr Westergaard and the rest of the Danish media.