Florence used by the Machine

If at first eu don’t succeed! 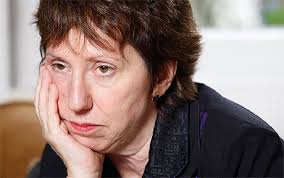 Isn’t the EU  a joke? Consider;

David Cameron’s plea for Europe to back a no-fly zone over Libya was spectacularly sabotaged last night by Britain’s OWN commissioner in Brussels.

The PM and French President Nicolas Sarkozy called for a no-fly zone – and even air strikes – to prevent Colonel Gaddafi using his jets to wreak death from above on rebels.

But Mr Cameron’s bid for action was wrecked by Baroness Ashton, who is the EU’s foreign policy chief. The Labour peer – appointed by Gordon Brown – warned a no-fly zone could cost civilian lives and told the PM: “Hold your horses.” Her comments were seized on by Germany and other countries. Mr Cameron failed to get spineless EU leaders even to use the phrase “no-fly zone” in the joint statement after yesterday’s emergency summit on the crisis.

Got that? Britain’s attempts to get the EU to even consider the idea of a NFZ is thwarted by the British EU Foreign Kommisar Ashton. Talk about the enemy within! Aston is Brown’s parting gift to the UK. He installed this wretched apparachik in order to ensure that events like this could happen. So whilst we can righteously rail against Ashton, it was LABOUR who put her there.

4 thoughts on “BRITAIN VERSUS BRITAIN – THE EU IS WORKING WELL!”