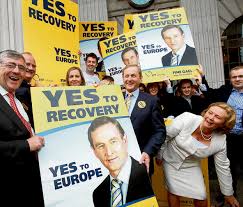 Merrill Lynch weighs in on the Irish Corporation Tax debate;

“Ireland could raise its 12.5pc corporation tax rate by a “moderate” amount and not hurt multinational investment here, the largest bank in the US has claimed.

If Ireland raised the rate by a small amount, it could also lead to a reduction in interest on the country’s €85bn bailout package, Bank of America Merrill Lynch claimed in a note. The bank, the result of a merger at the height of the financial crisis, said simply saying multinational investment would flee from Ireland because of any change was “premature”.

Meanwhile, the EU is not moving away from the position that Ireland will get a reduction in the EXTORTIONATE Interest Rate being charged on its massive bail-out loan IF it makes a proposal to increase Corporation Tax. As you know, Irish politicians insist they will not accept an increase in this rate. It appears no-one has told them that they no longer run the economy….

4 thoughts on “WHY CORPORATION TAX SHOULD INCREASE…”