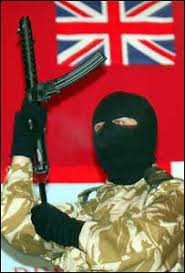 Quite simply, the decision by the Irish and British Governments to invite loyalist terrorist godfathers to meet the Queen in Dublin is nauseating and yet another triumph for the terrorist class. It is good to know I am not alone in feeling like this;

“As loyalist paramilitary leaders prepare to attend a ceremony for the Queen’s visit to Ireland, a victims campaigner has said they should be visiting graveyards instead. UDA leader Jackie McDonald is among several prominent loyalists who have been invited to Islandbridge. There, the Queen will remember Irish soldiers who died in two World Wars.

But Jude Whyte, whose mother died in a loyalist bomb, said it was important to acknowledge the damage done in NI. Peggy Whyte was 52 years old when she was killed in a bomb, thought to have been left by the UVF, at the front of her home in University Street, Belfast in April, 1984. Her son said: “It would be far more important in terms of peace and reconciliation that they perhaps visited the graveyards and looked at the damage their organisation did,” he said. “Their casualties and victims were unarmed civilians who were no harm to anybody. “Try to understand the damage that the civilian population suffered here. “You broke a lot of hearts and you maimed and murdered a lot of people. It is time to say sorry to them.”

I agree with this lady. However, what does Peter Robinson’s parrot Rev Gibson have to say?

However, Reverend Mervyn Gibson who sits on the Loyalist Commission, defended those loyalists who had made “a significant contribution towards peace”.

Oh, by not killing too many more people? By being allowed to indulge in their criminal racketeering? By dealing drugs and ruining young lives? By spreading their toxic poison everywhere they infest?

Utterly hypocritical. Northern Ireland has embraced honouring terrorists – I haven’t. I remain opposed to all this depravity.