…and call me by my name!

THE INDIGNITY OF SOCIALISED HEALTHCARE 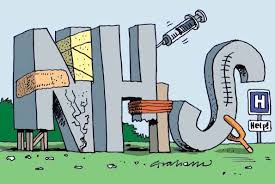 This article caught my eye. As readers will know, I have been regularly castigated in the media (BBC in particular) for daring to suggest that the NHS is far from perfect and needs major reform if it is to deliver. If you mention filthy hospital wards, uncaring nurses, bloated bureaucracy, vast waste, gross incompetency..you are damned. The NHS is beyond criticism and this absurdity characterises debate in the UK. And yet…

“No system of universal healthcare is perfect. All have their pros and cons. But by common agreement, the best and most effective tend to be those that combine public provision with some form of co-payment or compulsory health insurance. Many of the best healthcare systems also allow for extensive private sector involvement.

Yet in the UK, anything that could be construed as partial “privatisation” remains strictly off limits. Similarly, any discussion of co-payment that goes beyond simple prescription charges, dental care and so on, is taboo. Debate about the future of the NHS remains largely frozen in a miasma of post-war nostalgia. On healthcare reform, as on much else, Britain is firmly stuck in the past.

Even Sweden, spiritual home of the high-tax, social market economy, enthusiastically embraces both co-payment and private sector participation. You won’t pay less than 15 euros to see a doctor in Sweden”

“It is often said that providing for the old and sick is the mark of a civilised society, and so it is. But if maintaining spending on healthcare and pensioners is at the expense of investment in future competitiveness – infrastructure, training and education – then it condemns the country to long-term decline.

The idea of co-payment is thought perfectly acceptable for education – higher tuition fees are just that. But when it comes to healthcare, it’s not to be discussed. The policy choices seem ever more dictated by the demographics of an ageing society. Britain prefers to spend wastefully on its past than invest in its future.

The fact is that the NHS does need major surgery but no one will countenance this. Our craven political class, bowing to media approval, keep backing off. And yet there is one certainty and it is this; the NHS is guaranteed to fail in the long term unless there is change.