The Guardian newspaper is on its uppers:

On Thursday, Guardian News and Media (GNM) announced that The Guardian and its sister paper, The Observer, had lost £33m in cash terms last year after failing to staunch losses that ran to £34.4m the year before. Unaudited results for the year ending 31 March showed that GNM’s revenues, fell to £198m last year compared with £221m the year before […]

Andrew Miller, the chief executive of GNM’s parent company, Guardian Media Group (GMG), warned staff in a series of meetings this week that the group could run out of cash in three to five years if he does not make radical changes, which could include up to 175 redundancies. 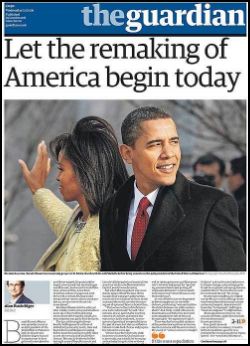 This is such terrible, terrible news. Well, it’s terrible for someone but I’ve just popped another umbrella in my beer. To think that a prime HQ of the Leftist power elite, commies, Fabians, terror supporters and other riff-raff might be going down the gurgler is cheering me no end. Hey, maybe we’re not killing gaia fast for The Guardian to survive. If we bought more polluting cars the paper might be in a healthier state.

“What are you talking about Pete?” I hear you ask.

What I mean is that The Guardian, home of Goerge Monbiot and a chief promoter of all things enviroloony is subsidised with the profits from … Auto Trader. Oh the irony, oh the towering hypocrisy of routinely demonising the selfish destructiveness of driving a car while taking white can man’s shilling. Another great subsidy comes from the working man because The Guardian is the state’s choice of advertiser for thousands of economy-killing government jobs each week. Even so, it’s looking grim. It’s interesting to see that whilst more debt and spending is the Left wing solution when it’s someone else’s money, at The Guardian 300 jobs have gone already in what would be the act of an ideological maniac if he was spending the taxpayer’s money.

16 thoughts on “THE GUARDIAN IS RUNNING OUT OF MONEY”