Monckton’s gone and put his foot in it.

Standing in front of a projection of a swastika next to a quote from Prof Garnaut that read: “The outsider to climate science has no rational choice but to accept that, on the balance of probabilities, the mainstream science is right in pointing to high risks from unmitigated climate change,” he told the audience: “That’s a fascist point of view. “That you merely accept authority without question. Heil Hitler, on we go.” 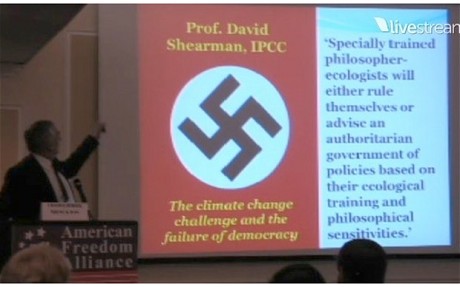 The Lord (and deputy leader of UKIP) has withdrawn his comments and apologised for his “unparliamentary and unstatesmanlike” opinions. Quite right too, a sensible outcome from which all can learn. I’ll tell you what though, if any scientist tells me I have “no choice” but to accept his opinion as fact, the fascistic tosser can get stuffed.