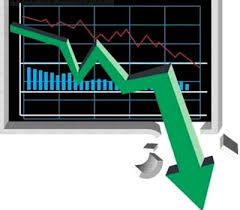 Is the US sinking into recession? The money markets think so;

The FTSE 100 took another battering today, opening 2.4% down and slipping below 5,00 points, after a disastrous day yesterday which saw £62bn wiped off the value of leading shares. The tumbling figures were mirrored by European markets, with Paris, Frankfurt, Madrid and Milan stock markets falling by 3% in early trading. And Asian markets took a beating with Japan’s Nikkei 225 index dropping 2.5% to 8,719.24 and Hong Kong’s Hang Seng sliding 3.1% to 19,399.92. World stock markets plummeted Friday amid signs of a possible U.S. recession and renewed worries over the health of Europe’s banks. Banking stocks were again the major casualties as the FTSE 100 Index slipped down again to below  the 5,000 barrier, tumbling to 4,935 points.

I’m afraid that things can only get worse.

In Brussels and in Washington, denial is the order of the day. Rather than DEAL with the reality that they cannot spend what they do not have, instead they look to print more money, issue pointless Eurobonds, do everything possible to confront reality.  There is every reason for investors to be concerned about Banks and the exposures they have taken and then hidden. There is every reason for investors to reflect on Obama’s total failure to get to grips with excessive Government borrowing.

The markets behave rationally – unlike the politicians. So what looks like a collapse isn’t – it is simply reality asserting itself.