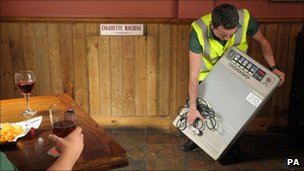 The Health Nazis are so busy these days and once again they know best and so they BAN things;

The sale of tobacco from vending machines has been banned in England, with anyone caught selling cigarettes in machines facing a fine of £2,500. The Department of Health said the ban had been introduced to prevent under-age sales to children and to support adults who were trying to quit. The rest of the UK is expected to implement a similar ban next year. Some pub landlords say it is a further threat to a livelihood that has already been damaged by the smoking ban. But Cancer Research and the British Heart Foundation have welcomed the move.

It seems to me that IF Government and its agencies really think tobacco such a bad thing, BAN IT and be done.