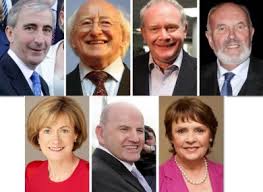 Well, I watched the final debate of the campaign for the Irish Presidency last evening and if EVER there was an argument  for a constitutional Monarchy, this was it. Talk about the Seven Dwarfs. We all know who Grumpy is (Hello McGuinness) but the rest made me dozy.

Before last night. Sean Gallagher was the front runner. An alleged “Independent” everyone knows he is the Fianna Fail man. Gallagher led the polls by quite a margin, with Michael. D. Higgins a close second. Dropping back quite a bit into third place was Provo Godfather Mandela McGuinness. The rest are totally irrelevant.

But Gallagher came a real cropper last night. Or at least I think so. He was ambushed by Martin McGuinness and for once McGuinness had a point; You can read the details here. In essence, Gallagher appeared to show less than desired probity when it came to collecting cheques in brown evelopes. Fianni Fail roots showing!

My conclusion is that Gallagher is not fit to be President based on what I observed. But then again, nor are any of the rest. Higgins appeared somewhat Statesmanlike but then again I recall his hatred towards Israel and so I cannot support the idea that he might win.

The answer is obvious; the next Irish head of State should be…Her Majesty the Queen. I’m all for inclusivity after all..

31 thoughts on “THE RACE FOR THE ARAS”