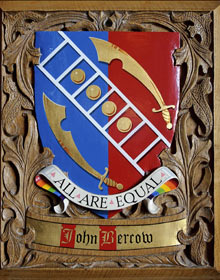 The Speaker unveiled his heraldic yesterday. Have you ever in your puff seen anything so completely naff as this contraption? The one noble aspect, a pair of Essex seax knives (he went to univeristy in Essex), ought to be in three. Every other part of it is staggeringly sad. Apparently the ladder represents that he came from low beginnings. Those four blobs in the middle are tennis balls, because he’s a qualified tennis coach and he likes the game. As we look down, good grief, we have a motto which is ghastly and banal. Pink triangles and rainbow colours are intended to convey, according to the Guardian, his commitment to something called ‘lesbian, gay, bisexual and transgender rights’.

I thought the College of Arms had rules against the absurd, though obviously not.

Conservatives in Buckinghamshire had the opportunity to send Farage to the Commons last year – and voted for this prat instead.

8 thoughts on “ALAN PARTRIDGE WOULD APPROVE”