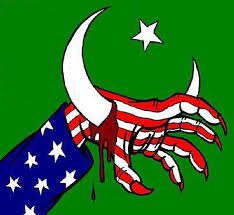 It’s the pathetic dhimmitude that one has come to expect from the Obama regime;

First the Pentagon hosts the 9/11 imam. Then the Marines open a mosque at Quantico. Now the Army’s letting JROTC cadets wear the hijab. What next?

In a letter to a Muslim group sent on Defense Secretary Leon Panetta’s behalf, Deputy Assistant Secretary of the Army Larry Stubblefield said the Army will now let Muslims in the Junior Reserve Officers’ Training Corps wear the Islamic headscarf during training and parade formations.

“Based on your concerns, the Army has reviewed its JROTC uniform policy and will develop appropriate procedures to provide cadets the opportunity to request the wear of religious head dress, such as the turban and hijab,” Stubblefield wrote. “The Army prides itself in being a diverse organization, comprised of individuals from many faiths and religions. We appreciate you bringing this matter to our attention.”

The group who filed the complaint? The Council on American-Islamic Relations, the same one the Justice Department implicated in a scheme to raise millions for terrorists in America. CAIR is so shady the IRS recently revoked its nonprofit status for failing to disclose funding sources for the past three years in violation of federal law. It’s so dirty FBI Director Robert Mueller recently testified he refuses to do outreach with it.

So why are we taking policy cues from a group former Pentagon intelligence chief Lt. Gen. Jerry Boykin calls a “dangerous front” for the radical Muslim Brotherhood, which he says is trying to infiltrate and sabotage the U.S. government and military from within?

Why indeed? It strikes me that after four years of Obama, the US has become weaker, much more inclined to appease Islam. We saw it at Fortd Hood and we keep seeing it.   The image of Hijab wearing cadets should strike fear into every thinking American. It seems to inspire Obama.

18 thoughts on “ALL AMERICAN HIJAB…”