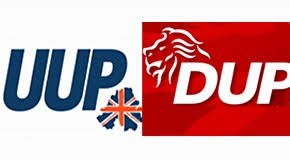 A brief forage back into the wilderness of Northern Ireland politics and this time concerning the “quest” for Unionist Unity. This item caught my eye!

Peter Robinson has a dream: a single unionist party. But for some Ulster Unionists, this represents a nightmare: the DUP destroying the UUP. Whatever one’s perspective, this holy grail in unionism comes up every so often. Remember the talks involving the UUP, DUP and Conservatives that ended in acrimony in 2010?

Indeed, Peter Robinson is talking about it again – because his party and members of the Ulster Unionist party are formally talking, apparently about closer cooperation. One issue that concerns some of them is protecting the office of first minister from falling under Sinn Fein control, should they gain the largest number of seats at the next assembly election.

This is all nonsense.

For starters, the “single unionist party” will never happen – too many egos and too much history.

Then there is the issue over which policies and issues to unite around. Not so simple with the little Ulster Nationalists in the DUP wanting to consume whatever is left of the Ulster Unionist’s broader interest in the UK and in particular with Conservatism.

Finally, the real aim here seems to be to want to keep the alleged;y coveted “First Minister” title for Unionism. But as I have pointed out ad nauseum, this is purely a symbolic title. The co-First Minister, Martin McGuinness, has a complete veto over everything the First Minister does. So isn’t it more accurate to say that the drive for “unionist unity” is all about preserving a pointless symbolism that means nothing in an Assembly that undermines the Britishness of Northern Ireland by the day? If the UUP and DUP want to unite, let it be around the need to see justice prevail, to see terrorism excised from the institutions of Government, and to see the tenets of democratic government restored at Stormont. On that, all I hear is silence.

7 thoughts on “A COALITION OF THE ABSURD”