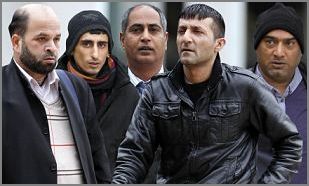 What a catastrophe mass immigration is for the British people.

Nine Muslim men have been found guilty of being part of a child grooming ring that manipulated underage girls into having sex by providing them with alcohol and drugs. The victims were as young as 13 years of age, including one who was made pregnant and forced into having an abortion. Police said one of the girls was raped by 20 men in one night.

The attackers all know each other. All but one are Pakistani, some from the same Paki village and one is Afghan. They’ll be sentenced tomorrow, when no doubt the full force of the law might see them banged up for a couple of years. And we’ll be back here again. Paki men are into grooming and raping little white girls. They’re not the daughters of the type of people who tut at racists and anti-immigrant throwbacks. The victims are from broken homes like in this case, where all the victims were known to the State.

Mohammed Shafiq of the Ramadan Foundation is quoted as saying that on-street grooming ‘is a significant problem for the British Pakistani community’. ‘They think that white teenage girls are worthless and can be abused without a second thought – it is this sort of behaviour that is bringing shame on our community.”

But we knew that all along, and it’ll happen again because not only are the comfy classes never affected by the disaster they inflicted on the British working class, they turn their minds against it. They’re comfortable and smug now, but the British people won’t always tolerate it. I sincerely look forward to the day.
———-
UPDATE: Greater Manchester Police Assistant Chief Constable Steve Heywood says it’s not about race: “It is not a racial issue. This is about adults preying on vulnerable young children. It just happens that in this particular area and time the demographics were that these were Asian men.” And if you believe that, you too are stupid enough to become a senior copper and talk crap.
Click to rate this post!
[Total: 0 Average: 0]
britain GOVERNMENT Immigration Islam