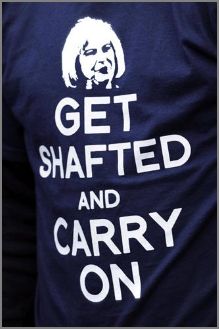 The Home Secretary was heckled by police trade unionists this afternoon. For once I’m on the side of the politician. For decades now the police have been against us, the British people, who are looted to make them the best paid of state agents. For decades they’ve been happy to enforce the merciless dictates of the politially correct state on us, hide behind bushes with radar guns to catch an unsuspecting motorist straying over the speed limit, arrest Christians for handing out Christian literature, arrest homeowners for defending themselves and their families against invaders and even arrest someone for calling a police horse “gay”.

They’ve been happy to disappear off of our streets and into police cars and helicopters, all the better to arrive somewhere after a crime has been committed. They’ve been happy to retreat from civil society and become a strange, distant force which reappears occasionally as paramilitaries during a London protest. What they’ve long ceased to be are British police officers, of British society and both accountable and subservient to us.

When millions of Londoners prayed for help last August as the city burned in dozens of locations, they were abandoned. As homes, business and cars were torched the police stayed hidden and kept their own fat arses safe. This is what we get for decades of government hosing the police down with more and more of our money.

So screw them. Screw every last, fat, doughnut-munching, tax-feeding one of them. Screw them and their salaries and their pensions and all the other perks they get only by the sweat of the productive class. If the police were disbanded tonight most of us wouldn’t notice, except that our tax monkey would be a little less heavy. The country’s bust, the economy’s knackered, the good times are over, and they can’t accept modest changes to the most generous of terms, demanding that we’re looted as heavily as ever. Well screw the lot of’em.

9 thoughts on “TO PROTECT AND SERVE – THEIR PAY AND PERKS”