‘There were about 20 young black guys all with their hoods up armed with sticks and bats and knives. They just ran in the pub and started trying to attack people. 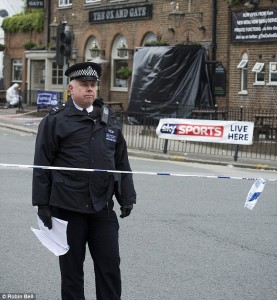 The adjoining picture is that of a British Police Officer, stationed at the scene of the crime.

That information is placed so that those who have never seen a Policeman now know what they look like.

7 thoughts on “signs of our times”