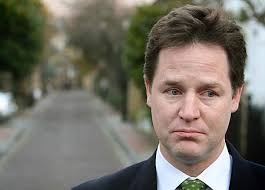 Nick Clegg becomes more irritating by the day. A few days past. the Home Secretary Theresa May suggested that the UK would put in place emergency measures to stop a tide of EU immigrants flooding here should the Euro collapse. I doubted whether she COULD do this effectively  but it seems a sensible enough idea. The Deputy PM is having NONE of it..

The Deputy Prime Minister condemned the idea of stopping migrants from the financially stricken country as “far-fetched”, “apocalyptic” and “deeply unhelpful”.

His remarks are likely to be seen as a challenge to Theresa May, the Home Secretary, who has revealed officials are working on the possibility of emergency border controls.

This weekend, she told The Daily Telegraph it is “right that we do some contingency planning” aimed at controlling Britain’s borders in case there is a financial collapse in Europe. She said there was no evidence of increased migration at present, but that it was “difficult to say how it is going to develop in coming weeks”. There are growing concerns that millions of Greeks could be forced to look for work abroad if a financial collapse engulfs the country.

Clegg is a foaming at the mouth Europhile and it is he and his ilk whose arrogance and hubris has causes the chaos that now engulfs the continent and which threatens revolution, financial meltdown and disaster.  And yet he speaks a strange truth. The truth is that the ONLY way we can be sure the drawbridge CAN be lifted up and immigration from the EU halted for good is if we leave this accursed institution.  Naturally Clegg insists that we stay.