Not everything Arabic is threatening

DAVID STOCKMAN: BACK O’ THE NET

MEANWHILE, IN THE LAND OF THE FREE

DIMON: BOND MARKETS WILL TURN AGAINST US

THE KING HAS LOST HIS CROWN… 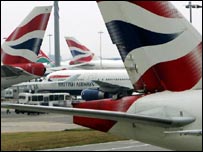 British Airways has complained that the major UK terror alert back in August has cost it dearly, with profits down by 27%.  Had Al Queda succeeded in destroying several aircraft leaving UK airports,  I wonder how much further down profits would be?

I also wonder just how opportunistic British Airways are being here – since they casually mention that they were also running a loss-making subsidiary during this time? I fully appreciate the difficulties that must be involved in running a major air carrier at a time when certain Islamists seek to use aircraft as flying bombs and certain politicians see a chance to scam more taxation out of the Industry under the guise of global warming. But the fact is BA MADE substantial profits even during this difficult period and so I am somewhat cynical about the whining that has accompanied this latest financial report. The war on terror carries a price – for us all.