Give the f@**ckers power, and they will f#@cking use it!. 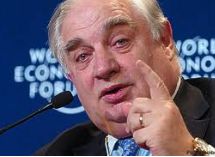 This is the global Power Elite talking.

When Peter Sutherland speaks the rest of us would do well to listen: he’s the Chairman of Goldman Sachs International, an ex-Chairman of BP, an ex-director of the Royal Bank of Scotland, a current Steering Group member of Bilderberg and a long time Chairman of the Trilateral Commission. That’s just a tiny sliver of his CV.

He recently told the House of Lords that the EU should “do its best to undermine” the “homogeneity” of its member states. It was a statement made ostensibly in his role as the UN’s special representative for migration, but this is a meaningless designation. It’s not about the EU or the UN. He’s talking on behalf of powers who control the institutions.

Sutherland told peers the future prosperity of many EU states depended on them becoming multicultural, and that migration was a “crucial dynamic for economic growth” in some EU nations “however difficult it may be to explain this to the citizens of those states”.

This is drivel of course. The idea that European peoples cannot be prosperous without smashing their culture apart under a tide of alien immigration is too ridiculous to contemplate seriously. So what is the Power Elite designing? Two possible explanations spring to mind.

The first is tax. The modern regulatory-state is a tax farmer for the banking elites which fund mega-deficits. Their puppet governments load up the debts and make the peasants pay it back again with interest. More immigrants means more welfare, more infrastructure spending, more deficits, more debts and ever greater slavery to the banking creditors who fund it.

The second is power and culture. That the aim of the Power Elite is to smash the nation-state, subsuming peoples into regional political/economic blocks such as the EU and NAFTA, is no secret. These blocks are then easily controlled by the globalists and resistance from the poeple is irrelevent. One global structure of governance is the end point. United societies, which are broadly homogenous in themselves but different from each other, can act as a powerful break on these global forces. Culturally conservative and patriotic peoples are much harder to push about and control than societies which have been seperated from their heritage, are ignorant of their past and atomised socially by mass immigration. In the end, a country just becomes a piece of land where disaparate peoples from around the world live at any particular time instead of being the ancestral homelands of distinctive people who would resist enforced change.

Whether we vote Tory or Labour, or GOP or Democrat is clearly irrelevent. All elections are irrelevent.  Peter Sutherland has lifted the lid on globalist plans and revealed what they intend – to smash patriotism and national identity completely.