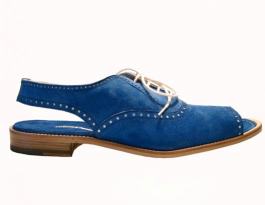 I guarantee if you buy your special guy a pair of these, you’ll never hear the end of it.

Neither will he if he ever walks out of the house in them.

Unless his client roster includes a modern-day Fred Flintstone or an ultra-camp incarnation of Elvis Presley, we can hardly imagine what luxe shoe designer Manolo Blahnik is doing making animal-print toe-ring thong sandals and blue suede peep-toe slingbacks – for dudes.

Best known for creating sky-high f–me [or mug-me, like Carrie on "Sex and the City"] stilettos – priced from $500 to $2,000 – Blahnik’s putting his reputation on the line and betting his empire on the fashion-forward adventurous spirit of the ultra-rich male.

"These are some simple sandals in beautiful materials, and a few classics – with a twist," Blahnik said in a press release. "I thought it was time to bring back some color into the male wardrobe."

"Some color," Manolo? We haven’t heard that kind of understatement since the naked Times Square guy told us he was "having a bad day."

And don’t even get us started on the Tarzan-Jesus-inspired leopard "Bir" thong – shirtless urban safari anyone?

So while it’s possible Blahnik will move a few pairs – after all, the shoes go on sale in Europe first in February and the men there will wear practically anything – we’re not quite convinced they’ll be a runaway hit stateside in the spring.

"I’d pass," said Brooklynite Tim Kulich, 28, when we showed him photos of the new designs. "It looks a little feminine to me."

Other Midtown office workers also scoffed at the outré styles – "I’m sure there are guys who will wear them based on the name," said Craig Poplar, 38. "I don’t think I’d ever be caught in suede, slingback, lace-up shoes with a heel."

More here, as well as a look at the rest of the line.

11 thoughts on “Something Special for the Man in Your Life”