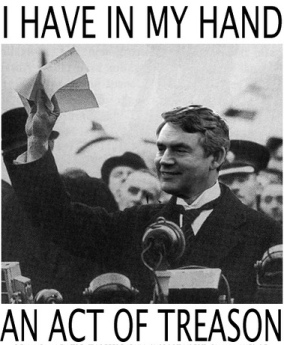 The Man Who Stole Our Pensions has now fenced most of what remained of the Sovereignty of the British poeple. We knew already that Gordon Brown is a contemptible coward, so it’s no surprise that he did the dirty deed behind closed doors. Maybe he’s looking forward to the Great Treason Trials of 2020, when the British people have finally reclaimed their inalienable freedom to govern themselves and put on trial those treasonous swine who gave away their Kingdom to a foreign power. Without a photo of him hovering over the foriegn constitution, he may imagine he can claim that the offending signature isn’t his.

So let’s be clear, what he done today is treasonous and illegal:

And I do declare that no foreign prince, person, prelate, state or potentate hath or ought to have any jurisdiction, power, superiority, pre-eminence or authority, ecclesiastical or spiritual, within this realm. So help me God."

…If any person whatsoever shall, within the United Kingdom or without, compass, imagine, invent, devise or to deprive or depose our Most Gracious Lady the Queen, …from the style, honour, or royal name of the imperial crown of the United Kingdom, in order by force or constraint to compel her… and such compassings, imaginations, inventions, devices, or intentions, or any of them, shall express, utter, or declare, by publishing any printing or writing, …or by any overt act or deed, every person so offending shall be guilty of felony, and being convicted thereof shall be liable, …to be transported beyond the seas for the term of his or her natural life.

You will to your uttermost bear Faith and Allegiance to the Queen’s Majesty; and will assist and defend all civil and temporal Jurisdictions, Pre-eminences, and Authorities, granted to Her Majesty and annexed to the Crown by Acts of Parliament, or otherwise, against all Foreign Princes, Persons, Prelates, States, or Potentates.

As in 1972 and with every treaty since, the constitution attacks and erodes the supremacy of the Crown in Parliament. So that’s one prime minister and one foreign secretary, bang to rights.

Over at eureferendum we see the signing has moved Commission El Presidente Barroso to explaim that "the EU is preparing itself to serve its citizens better and address world issues." Sorry to disabuse you old chum, but I am not a citizen of anything. Like all Englishmen and women, I am a Liege Subject of the Crown and you can get stuffed. If that confuses Manuel, here’s the message in old, traditional English:

54 thoughts on “Be You Ever So High, The Law is Above You”