EVEN FURTHER FROM POPULAR CULTURE THAN I THOUGHT

“It never occurred to us” 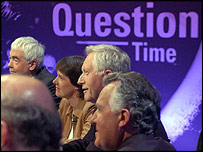 Did you see Question Time on the BBC last night? Not bad, for a change. Sure the audience were stacked with moonbats and converts to Greenism, but the panel were entertaining.

Michael Heseltine – the man who wanted to be Leader of the Conservatives – was good value. I don’t agree with him on virtually anything, but he’s an interesting speaker and he did make some good points.

Peter Hitchens is a man cut from the same clothe as myself. I have met Peter and found him an agreeable person who is good company. Pity the audience heckled him when he pointed out the nonsense around global warming, when he pointed out how ALL the political parties treat the electorate with contempt, how Cameron is Blair’s natural successor – not Brown, how the destruction of selective based Education has been a monstrous failure…all good stuff and all of which I agree with.

Amanda Platell was also good to watch. She was adept at pointing out the hypocrisies of both Labour and the modern Conservative Party under Love a Lout Dave Cameron. I think she spoke a lot of common sense and liked her.

Charles Clarke – former Home Secretary and now embittered politician every since he was sacked for his gross incompetence when a Minister was a hoot. I think he came across as a know-it-all, a bitter man, and someone who has not learnt from his errors. Most irritating character. Mr Bumble with a bad attitude.

And then – Ming the Merciless! Sir Ming Campbell – leader of the Glib-Dems. Oh dear – do you think he even knew what DAY of the week it was? He rarely showed any command of the topics being discussed, and his best moment came when he charged in to defend the marvellous comprehensive education system – which has destroyed the hopes of millions of kids. His key point seemed to revolve around the difference between cricket and football. What a moonbat!

One thought on “QUESTION TIME WATCH!”