Well, turns out that THEY haven’t gone away. We have a NEW IRA.

“Following extensive consultations, Irish republicans and a number of organisations involved in armed actions against the armed forces of the British crown have come together within a unified structure, under a single leadership, subservient to the constitution of the Irish Republican Army. “The leadership of the Irish Republican Army remains committed to the full realisation of the ideals and principles enshrined in the Proclamation of 1916.

Hey Marty, you tell that violence does not pay… 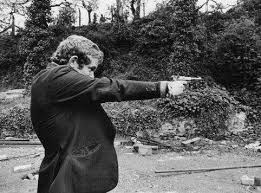