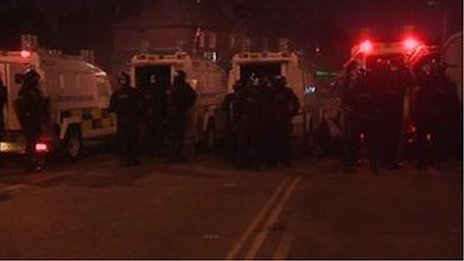 Thanks to Mahons for covering the rioting in Belfast that has disfigured the place for THREE nights in a row, with dozens and dozens of police officers injured.  He is right that the UVF are behind the violence – well, some of the violence. But even the unionist loathing BBC report that “hardline” Republicans are also playing a role in the street violence.

The IRA were taken into Government because many nationalists CHOSE to vote for their political alter egos, Sinn Fein. This has allowed them to wield power, direct cash into certain “community organiations” and look after their former front line “volunteers” (aka terrorists) The UVF and UDA did NOT win the votes of unionists, thank god. Instead they have been marginalised through the ballot box and their ability to share the financial largesse that Sinn Fein can is much reduced.

BUT they have learned a key lesson of the “peace process”….VIOLENCE PAYS.  Sinn Fein sit in Government on the bodies of 1700 killed by the IRA. UVF “commanders” and those ever so well placed (AND well paid) ….ahem…community workers in “interface” areas may reckon that all they need to do is keep on rioting in the well placed anticipation that they WILL be bought off. This is all about gangster rule and in Northern Ireland the biggest gangsters of all sit in Stormont. When the PSNI cry out for politicians “to do something” do they not realise the sheer naivity of such requests?

62 thoughts on “THEY HAVEN’T GONE AWAY – PART TWO”