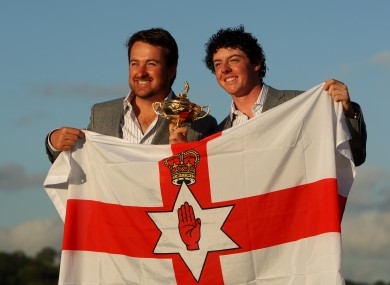 It must REALLY sicken the Irish authorities when NI golfer Rory McIlroy wraps himself in the flag of Northern Ireland. So they try this pathetic stunt…

Golfer Rory McIlroy will be offered the chance to carry the Irish flag at the opening ceremony of the 2016 Rio Olympics in return for pledging his sporting allegiance to Team Ireland. Pat Hickey, the president of the Olympic Council of Ireland, has attempted to sway the world number one after years of speculation about who McIlroy will declare for. “I will say to Rory that if he declares for Ireland, then he will automatically put himself in pole position to carry the Tricolour into the stadium in Rio,” said Mr Hickey, who is also a board member on the International Olympic Committee. “What he has done on the world stage for Irish golf is absolutely astonishing. Personally, I would dearly love for him to represent Ireland.”

WHY would British born McIlroy want to carry the Irish tricolor? It’s the flag of a foreign country. Can’t the Irish find someone born in the 26 counties worth carrying their flag? Isn’t this just overt politicising on the par of the Irish Olympic Authority, likely to embarrass young Rory? Can’t they just accept that he is…and will remain…British?