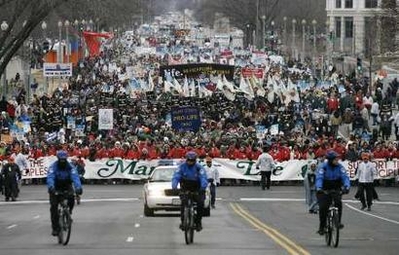 Washington D.C., January 22, 2008:  The sheer size of this pro-life crowd is astounding. Thousands came out to march in the freezing cold, to make their pro-life opinions heard and to mark the 35th anniversary of  Roe v. Wade, the Supreme Court decision which legalized abortion.

And if it weren’t for talk radio and the internet, I would probably not  know about the annual Right to Life March.

Wandering around Google today, I stumbled on an essay written by a journalism student who had been present at one of the annual Right to Life marches. She wrote of her intense emotions at the sight of so many marchers. And she wrote of her strong belief in a woman’s right to choose abortion, and a citizen’s right to assemble and to protest.

She  wrote that she felt strong conflicting emotions when she realized that thousands of  marchers were expressing their opinion that a woman’s right to choose does not supercede an unborn’s right to life.  And she wrote that she wanted  to shut down the march and to deny the right to lifers their public protest of Roe v. Wade.

It was an interesting essay and notable for the student’s ability to be self-reflective. I don’t think this journalism student is alone; there is very little coverage of this event on the mainstream media.

152 thoughts on “Right to Life March”