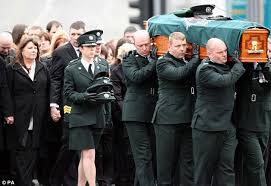 THE widow of murdered police officer Stephen Carroll says a campaign started by one of the “Guildford Four” to free the republican dissidents jailed for her husband’s killing has plunged her into fresh “hell”. Kate Carroll said she has be unable to sleep since she learned that Gerry Conlon, whose wrongful conviction following the Provisional IRA bombing in Guildford, England was quashed in 1989, had founded the Craigavon Two campaign to free Brendan McConville and John Paul Wootton – the men who were found guilty of Constable Carroll’s murder.

Constable Carroll was responding to a 999 call when he was shot by republican dissidents in Craigavon in March, 2009. “After all (that has happened) am I now going to be put through more hell? I couldn’t take it in when I heard. I was taken aback and I’m still trying to take it in. It’s hit me like a ton of bricks,” Mrs Carroll told the ‘Mail’. “How can he (Mr Conlon) make a judgement when he wasn’t in court to hear the trial.” Mr Conlon told a daily regional newspaper that he was fighting to free McConville and Wootton – who were convicted in May and sentenced to imprisonment for a minimum of 25 years and 14 years respectively – as he believed the convictions were ‘unsafe”

Amazing that some fools are so deluded that they consider every conviction for Irish republican savagery “unsafe”. I feel for Kate Carroll who has enough to worry about WITHOUT the additional concern that the republican killer of her husband could be released from jail thanks to the campaigning efforts of Gerry Conlon?

5 thoughts on “THE GUILDFORD TWO…”