Right, I want to take a few moments of your time to talk about something which cuts to the heart of the entire Northern Ireland issue, so I hope you will read this and think about it no matter where you are in the world.

If you read nothing else from me today please please read this. 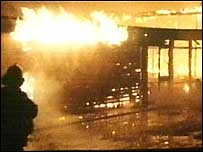 First, the facts of the matter. On the 17th February 1978, the IRA set off a bomb at the La Mon House Hotel, near Belfast.  On that fateful evening members of the Irish Collie Dog club were holding a dinner dance function at the hotel. The IRA bomb was designed to cause carnage and it succeeded beyond the terrorists wildest dreams. It created a nightmare.  A firestorm was created in the small hotel, incinerating 12 people. Those who were not incinerated were shredded with glass and brick.

Three married couples perished in the flames that night. Amongst them was 25 year old Elizabeth McCracken, along with with her husband Ian. Her father, Ernie, was also present that night and this is his last memories of his daughter and son-in-law….

"Elizabeth was an only child. She had beautiful blue eyes. We were attending the dinner dance of the Irish Collies Club. I was club secretary. The event was an annual one and we went to a different hotel every year. That year, 1978, we chose the La Mon House Hotel, near Comber, Co Down. Elizabeth really did look very pretty that night; she was wearing a peach chiffon dress with a fur bolero.

Her husband of 18 months, Ian, had bought her the dress as a present.

Ian’s mother, Peggy, was sitting at a table with Ernie and myself, while Elizabeth and Ian sat at a table close by with another young couple. Ernie had wanted us all to sit together, but there wasn’t enough room at either of the tables.

We were served our first course around 8.45pm and the waiting staff were lifting our dishes at around 9pm when the fire bomb exploded. It was like the sun had exploded in front of my very eyes – a huge, bright fireball of light and the most deafening noise. Then, the flames came . . . They kept rising higher and higher. People were on fire. They were rolling around on the floor trying to put the flames out.

Nobody knew what was happening. The lights had gone out and we couldn’t see. People were getting up out of their seats, squealing and panicking. But, Ernie and I were glued to the spot. We didn’t know what to make of it – or what to do. Someone pushed us forward and kept pushing us out through the kitchen. It was full of broken crockery. Everything was smashed and ruined. A man grabbed a pair of curtains to wrap around his wife because she was on fire.

Then, we were outside, but Elizabeth and Ian were nowhere to be found. I thought they were coming behind me – they weren’t sitting that far away from us so they should have made it outside shortly after us. I kept saying, Elizabeth, Elizabeth . . . I want Elizabeth. Where is she? I can’t find her . . .’

We searched everywhere that night in a blind panic. There were few telephones in those days, so we searched all the hospitals in Belfast and different police stations.

We were at Dundonald police station around 5.30am when we found out the remains of Elizabeth and Ian had been discovered. They were lying incinerated inside.

What more can I say? It would break the strongest heart. If you are a father reading this, just imagine this was your daughter you were speaking about. 18 months married – incinerated by the IRA.

Another survivor, Lynette Holt, had this to say..

"I remember a bang and seeing flames all over the dance area, someone pushed me under the table. Then the lights went out. My best friend, Christine Lockhart, was sitting next to me. I don’t know what happened to her. I knew if she fell, she wouldn’t get up without help because she had an artificial leg.

The girl behind me was killed, and my husband, David, was blasted halfway across the room. A man came out onto the dance floor, he was completely on fire . . . like a torch. Then my husband pulled the table off me and shouted at me to come on. I put my hands out to see if I could find Christine. I wanted to drag her towards the kitchen. The smoke and flames were like plastic burning. You couldn’t breath. I knew that if I didn’t get out I would suffocate. I was in a pitch black cloud of smoke, and all around me were people screaming and panicking. The heat was indescribable. I felt my back was on fire."

You hear a lot on the net from certain IRA sympathisers who talk about the IRA’s courageous war. In reality it was a squalid filthy terror campaign. This is the true measure of their wickedness.  I would ask them to not bother with the excuses because there are none.

As we approach the 30th anniversary of this horrific event, comes the news that Dr Ian Paisley has been asked to STAY AWAY from a memorial service for those who died. They, like me and many others, are disgusted that he cavorts with one of those allegedly behind this savage terrorist attack.

Who might THAT be, you ask? Let me quote the following…this is from the House of Commons debate on 13th February 2003.

There are many unanswered questions and many people to be called to account. I believe that the victims of La Mon cannot simply put this chapter behind them until such time as they obtain answers to their questions. There should be no cover-ups and no one should be above the law. The police are certain that the attack was sanctioned and approved by Gerry Adams who was then in command of those who are known to have carried it out.

The speaker was DUP MP Mrs Iris Robinson. She now shares power with Gerry Adams. And it is the REVULSION that so many of us feel at the betrayal of the dead at La Mon AND many other places that makes us turn our back on the First Minister. Victims aren’t given awards, victims aren’t lauded in the media and have movies made about them. No, they are forgotten, inconvenient statistics.

Well, NOT here. I support those families of those murdered at La Mon House in their decision to tell Ian Paisley and the other betrayers to stay away from this sombre memorial. Time passes, the guilty have never been caught, and justice has not been done. We must not forget what happened at La Mon House – no matter which politicians it offends.