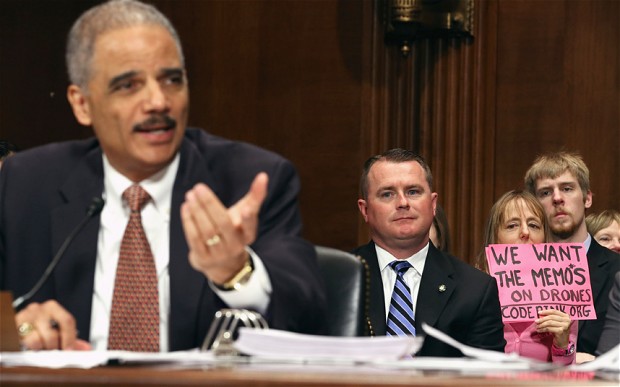 “…Mr Paul on Wednesday evening took to the floor of the Senate to launch an old-fashioned filibuster in an effort to delay a vote on the approval of Mr Brennan for CIA director. “I won’t be able to speak forever, but I’m going to speak as long as I can,” he said, before embarking on several hours of criticism of Mr Obama’s compliance with the US constitution.

Mr Obama has been sharply criticised for the secrecy surrounding his extension of America’s “targeted killing” campaign against al-Qaeda terrorist suspects using missile strikes by unmanned drones.
The secret campaign has killed an estimated 4,700 people in Pakistan, Yemen and Somalia. A quarter are estimated to have been civilians prompting anger among human rights campaigners….

…Senator Chuck Grassley, a Republican from Iowa, told him his reference to “extraordinary circumstances” such as September 11 or the 1941 bombing of Pearl Harbour were “extremely concerning”.
“It is imperative that we understand the operational boundaries for use of such force,” Mr Grassley said. “American citizens have a right to understand when their life can be taken by their government absent due process.”