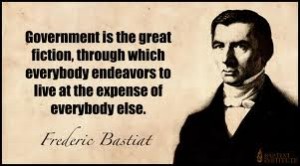 Excellent article here by Brendan O’Neill on the horrific consequence of the pursuance of State Welfarism by the Left as it seeks to inculcate future generations of clients…generation sloth.

“The cultivation of such dependency on the state has a devastating impact on community life in poor parts of Britain. Because if an individual’s or family’s every financial and therapeutic need is being met by the state, then what need is there for those people to turn to their own neighbours for help or advice?

Welfarism doesn’t only destroy individual pride and independence — it also eats away at social solidarity, the glue of local life, by encouraging people to become more reliant on the state than on their friends and neighbours.

The end result of this propping-up of communities is the kind of world Mick Philpott lived in, where a sense of entitlement to state cash overpowers any feeling of personal moral responsibility for improving one’s life, or any sense of duty to the community.

So to my mind, there’s no mystery as to why the poor are refusing to join the fight to preserve the massive and unwieldy welfare state: it’s because they live in the very areas where welfarism has wreaked its worst horrors.

It is the bleeding heart campaigners fighting to defend welfarism who are spreading a poisonous myth: that the less well-off could never survive, far less thrive, without the financial assistance and moral guidance of their middle-class betters.

He is right of course and yet when on listens to left wing politicians here in the UK, they steadfastly refuse to accept any of this and instead bleat about the need to tax “the rich” more so that they can continue peddling the Welfare narcotic at all costs. They know that if you rob Peter to pay Paul, you can be fairly confident that you will receive Paul’s voter.

5 thoughts on “THE WELFARISM NARCOTIC”