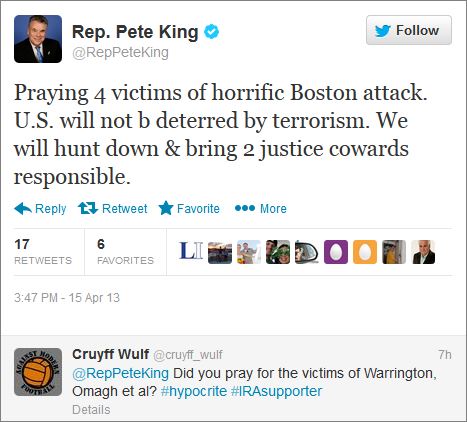 IRA man Peter King is pained, but I can’t think why. When Irish and British men, women and children were butchered by exactly the kind of terror which came to Boston yesterday he wasn’t so troubled. In fact he promoted it, defended it and worked to fund it.

No wonder this great warmonger wants Wikileaks classified as a terrorist organisation. One document it published – a February 2010 CIA “Red Cell Special Memorandum” – recounts how “Some Irish-Americans have long provided financial aid and material support for violent efforts to compel the United Kingdom to relinquish control of Northern Ireland…. The US-based Irish Northern Aid Committee (NORAID), founded in the late 1960s, provided the Provisional Irish Republican Army (PIRA) with money that was frequently used for arms purchases.”

NORAID was designated a terrorist organisation decades ago by the US Justice Department, which also won a legal case forcing NORAID to register P-IRA as its foreign principle. King was a prime and enthusiastic fundraiser and one of the IRA’s staunchest supporters in North America.

This is not a regretful Peter King today either. As recently as July 2011 he appeared before a Parliamentary committee and defended his 1982 comments at an IRA rally, that: “We must pledge ourselves to support those brave men and women who this very moment are carrying forth the struggle against British imperialism in the streets of Belfast and Derry.”

So what troubles him now? It can only be distance, because violence against innocents does not trouble him in principle. And that’s the problem with defending evil, because when it comes home, your words of denunciation sound hollow.

You can’t denounce evil in Boston and defend it somewhere else.

36 thoughts on “THE PROBLEM WITH DEFENDING EVIL”