AS I thought, it was all for show.

I live half a mile from where the suspect was caught, and I disregarded martial law and walked outside. What I noticed was fascinating: There were no police around. They weren’t checking in bushes, or looking through alleys or dumpsters. They were all assembled in a mall parking lot on the other side of town marching in formation for the media. This was a show of force, not a manhunt. 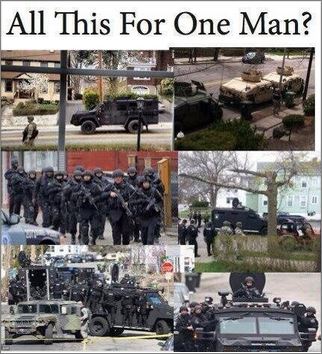 One young man had gone to ground in an urban area. The idea that he could be found by paramilitaries walking slowly up a road, or by driving around in armoured military vehicles, is absurd. A search involves maps, brains, shoe leather and dirty hands. What we saw was a show, a piece of security theatre set up for the media lens.

It worked of course. Note the applause from residents for the paramilitaries after White Hat had been bagged. Most of them had staked out Dunkin’Donuts all day and it was a fellow resident who actually found the suspect – after the police said he now go outside. He saw the tarp had been disturbed on his boat and used his hands to investigate. So we note also, like the authorities failed at the marathon, and like they initially focussed completely in the wrong direction for suspects, this theatre of the absurd completely failed to discover the whereabouts of the wounded man they were looking for all along.