A Petition with a difference

If you bomb us, shall we not bleed?

THROUGH THE LOOKING GLASS…

LEADING FROM BEHIND AND OVER THE CLIFF 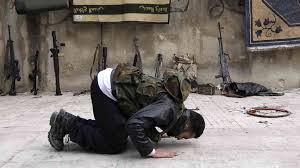 We have no dog in the Syrian fight but we can still get bitten.

The Assad regime is appalling (as I have said for YEARS here on ATW and elsewhere) but then again so is the Al Queda driven opposition, the so called “rebels”. However for some reason, the West seems to want to arm the Islamic terrorist opposition which to my mind is verging on the lunatic.

The government has set out the case for lifting or amending the EU arms embargo against the main Syrian opposition group, the National Coalition. The UK said such a move would strengthen moderate forces in the opposition.

The one thing that is missing in Syria is moderation in any regard. By arming the Islamic thuggery that seeks to topple Boy Bashar, all we are doing is laying down the seeds of the future caliphate, just as we are seeing in North Africa as we foolishly supported the “Arab Spring.”