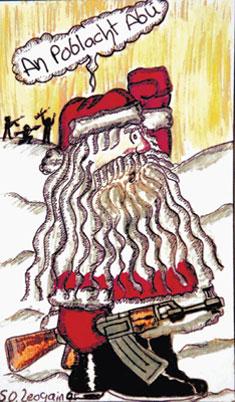 I invite ATW readers from outside of Northern Ireland to view the sort of Christmas Card which some Irish Republicans see as a celebration of the season.As you see, they delight in showing Santa with a machine gun. In another sketch, a gun-carrying snowman wears a black IRA-style beret. The Republican Sinn Fein cards are on sale in west Belfast. Calendars for 2007, with chilling photographs of masked gunmen, can also be bought at the outlet. And just in case some IRA sympathiser points out that this is not mainstream Republicanism at work, Sinn Fein’s official 2007 calendar, on sale on its website, marks the 35th anniversary of Bloody Sunday and the 20th anniversary of the killing of eight IRA men in Loughall. The Eight concerned were brought to justice before they could implement the murder spree they had in mind. Naturally Sinn Fein mourn the loss of the IRA associates. Terrorists stick together.

89 thoughts on “A REPUBLICAN MERRY XMAS!”