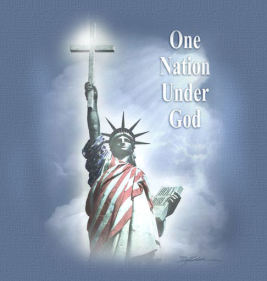 One of the things that most attracts me to the United States, and which stands it apart from so many other nations, is that its founding principles were steeped in The Bible.

Thomas Jefferson said "Can the liberties of a nation be thought secure when we have removed their only firm basis, a conviction in the minds of the people that these liberties are the gift of God?"

John Adams said "The Bible contains the most profound philosophy, the most perfect morality, and the most refined policy, that was ever conceived upon earth. It is the most republican book in the world"

Perhaps De Tocqueville was on the money when he said in 1830 that "for the Americans, the ideas of Christianity and liberty are so intermingled that it is almost impossible to get them to conceive of one without the other"

The United States was founded on Biblical truths and still stands as a beacon in this dark work because of its unique birth and the genius of those who brought it about. One Nation under God –  NOT a nation apart from God as the secularists would like us to believe!

20 thoughts on “ONE NATION UNDER GOD…”