Mike Rogers, chairman of the House Permanent Select Committee on Intelligence, added his rather important voice to the growing number of current and former officials who believe the Obama administration should expedite the release of some documents captured during the raid that killed Osama bin Laden. And Rogers, in an appearance Sunday on Meet the Press, suggested that the Obama administration cherry-picked the few documents released to date to create a narrative about al Qaeda favorable to the president.

“I think we ought to seriously give consideration to allowing more than 17 documents that were selectively picked by the administration to be made public,” he told Meet the Press host David Gregory. “I think that probably doesn’t tell the whole story.”

According to U.S. officials with knowledge of the documents, Rogers is right. The broader collection shows a far more complicated picture of al Qaeda than the one advanced by the Obama administration. In the months after bin Laden’s death and throughout the 2012 presidential campaign, the Obama administration depicted al Qaeda as an organization nearly eliminated by the U.S. campaign against it and portrayed bin Laden as a delusional leader out of touch with his troops. In his speech May 23, Obama declared the end to the Global War on Terror and said that a properly calibrated approach can manage any threats posed by al Qaeda in the future.

Put into perspective that 17 documents released by the Obama Administration showed an Al-Qaeda that was dismantled and in decline, but the 1000s of documents seized show a different picture. Add ontop of that Benghazi. An Al-Qaeda Attack that took place on the Anniversary of 9/11, and killed our Ambassador. 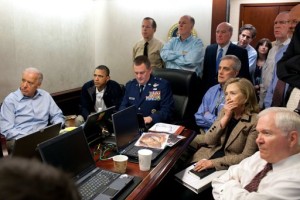 We had pictures of the whole White House Staff watching Bin Laden being killed, yet while our Ambassador was being murdered by a supposedly none existant group we still don’t know where our President was and who if ANYONE was in the situation room.

One thought on “Tie it to Benghazi”