Ah, Obama lands in South Africa just in time to join in the Mandela worship.

“US President Barack Obama is to meet members of Nelson Mandela’s family during his visit to South Africa, the White House says. But officials confirmed that the president will not see the ailing leader himself, who is in a critical conditions in hospital. Mr Obama’s Air Force One landed in Pretoria on Friday evening, as part of his three-country tour of Africa. He is holding talks with his South African counterpart, Jacob Zuma. The US president has described Mr Mandela as a “hero for the world”.

I wonder exactly what Obama finds so heroic about Mandela?

So, what DOES Obama find so inspiring about Mandela. Ah well, as Obama points out, he is not in SA for a photo op.

Correct – he has already got that… 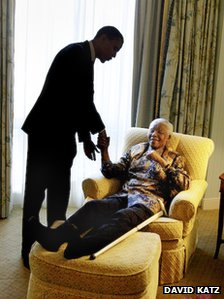