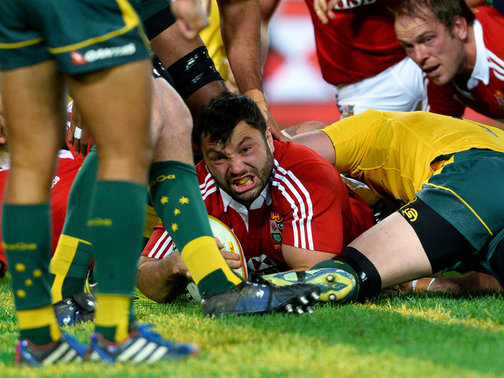 Can I come out from behind the sofa yet? Strewth, that was getting on for being a bit tense. But what a match. What a great game of rugby. It’s painful being a Lions fan. It’s a litany of heartbreak and what-ifs, but today the Lions were sublime. For those not in the know, The British and Irish Lions is an invitational rugby team. Every four years players from England, Wales, Scotland and Ireland come together to tour either Australia, New Zealand or South Africa for a three-test series against their national team. For a British or Irish rugby player, there’s no higher accolade than to be chosen, than to be able to say that you’re a Lion. For a few weeks every four years, nationality is forgotten because the Lions are touring.

2013 was Australia’s turn (we were last there 12 years ago), and today was was the deciding test of three after the Lions squeaked the first test and the Wallabies (the Aussie national rugby team) took the second to square it.

I actually had a fancy that the Wallabies would sneak this one. They had momentum and improving form after last week and the Lions had the brouhaha of dealing with Irish legend Brian O’Driscoll being left out for the Welsh truck Jamie Roberts. The Lions would have it though if we dominated up front (did someone call that one?!), and we smashed the Wallabies up front alright. We smashed them in the scrum, forcing them to concede penalty after penalty, we dominated the gainline, and we dominated the breakdown. For a top scrummaging performance: Alex Corbisiero (probably the best prop born in New York), Richard Hibbard and Adam Jones, take a bow.

I thought we then went and blew it when we let the Wallabies back in either side of half time, but the final half hour was punishing rugby for the Green and Gold. The Lions backs clicked and were suddenly doing everything right, Halfpenny hit the line sweetly, and we ran in the tries to blow them away. Highlights then, highlights (even if only with the Aussie commentary yet), and let’s see that glorious Geoff Parling tap tackle on Jesse Mogg again …

One of the precious things about rugby is that whining is extremely bad form. No matter what happens on the pitch, the losers man up and congratulate their opponents. Fair play then to the Wallabies, who observed the tradition in fine form. The Lions went on the slowest lap of honour in history after the game, and quite right too because half of the 84,000 crowd in Sydney’s ANZ stadium were in Lions shirts (including my brother, the jammy, troughing sod). The Wallabies stayed out on the pitch and sucked it up, and ages after the match ended they formed a guard of honour for the Lions as they came off the pitch. Top stuff.