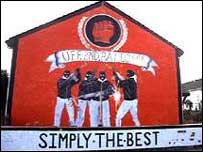 What a surprise. The so-called "hard men of loyalism" (Quislings to anyone with a brain btw) will not "stand in the way" of an Ian Paisley-Martin McGuinness government. That was the message delivered by the UDA’s political wing – the Ulster Political Research Group – in an interview with the Belfast Telegraph. Ho Hum.Cue celebrations all round.

I need not remind readers as to how vile and disgusting a terror group the UDA is. That it remains active, murdering and wounding, stealing and intimidating, up to its neck in every form of criminality. That it’s political frontmen welcome the admission of IRA terror proxies to Government is entirely predictable and should give the more reasoned element of the DUP food for thought. Does Jim Allister, for example, welcome the goodwill from the UDA’s stooges for his Party entering Government with the Irish mafiosa? Green light spells danger, to paraphrase Bily Ocean.