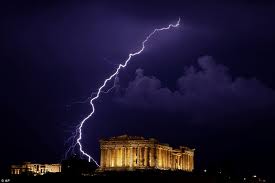 Unemployment in Greece rose to a new record high of 27.6 per cent in May, leaving almost two thirds of young people without a job, the Hellenic Statistics Authority said Thursday.  The jobless rate rose from 27 per cent in April and 23.8 per cent in May last year. Young people were by far the worst affected, with unemployment among job-seekers aged 15 to 24 standing at 64.9 per cent.

Got that? 65% of young people without a job. Just how does that impact on a society? And the number is growing! And if that were not nightmarish enough, guess what … yes..Greece has an IMMIGRATION issue!

Greek Minister of Shipping and the Aegean Miltiadis Varvitsiotis said some immigrants unlawfully pouring into Greece in hopes of finding asylum or going to other countries will be house in campsites on islands in the Aegean. Talking to the Greek radio station Vima 99,5, Miltiadis Varvitsiotis said tents and chemical toilets will be set up in the spaces of temporary accommodation.

Now, where might these immigrants “pouring” into the broken Greek State come from, do you think? Clue – think Islam.

2 thoughts on “THE LAND WHERE NO ONE WORKS..”