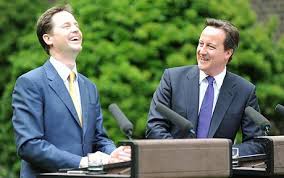 Intriguing to read that  David Cameron has started planning for a second coalition with the Liberal Democrats after 2015.

The Prime Minister has held private talks with Cabinet ministers over new Conservative Party rules which would make it easier to strike another deal. Under the plans, backbench Tories would be consulted on the new power-sharing agreement with the final text being put to them in a vote. Mr Cameron wants Conservative MPs to put their names to any second coalition agreement and “dip their hands in the blood”, a senior source said. Tory backbenchers unhappy at Mr Cameron’s deal with Mr Clegg have launched a string of rebellions since the last election, on issues including Europe, Lords reform and gay marriage.

The truth is that Cameron feels little in common with grass roots Conservatism but plenty in common with Metropolitan liberalism and a Coalition with the LibDems allows him to CONtinue the pretence that he would advance Conservative policies if only he was not linked and reliant on LibDems. In essence it provided him with plausible deniability.

From my perspective, Cameron is not a Conservative but a metropolitan common purpose driven Elitist who has no fixed principles. Is he any better than Ed Miliband? Marginally but that is a choice between dumb and dumber.