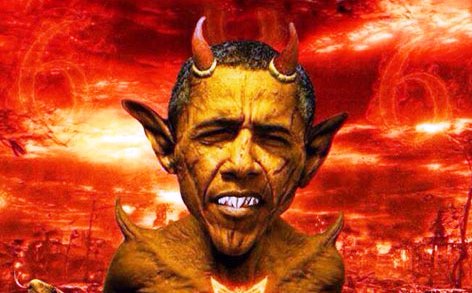 Popular and widely read Egyptian newspaper Al Wafd published the above picture today portraying U.S. President Barack Hussein Obama as Satan himself. The unflattering picture has been making the rounds on Facebook in the Middle East and, according to Al Wafd, is representative of the hatred growing numbers of people in the region have for the American president, thanks to his staunch and unwavering support for Islamists and jihadiis — whether in Nigeria, Libya, Egypt, or Syria — even as they terrorize, murder, rape, and burn down Christian churches, that is, even as they engage in diabolical activities.

So the President that was going to restore the US’s credibility around the World an Especially in the Middle East is viewed with such loving respect. President Obama has continually backed the forces of Evil in the Middle East, and the average person on the Arab street knows it.

The sad part is how many here in the West refuse to look at his actions and judge them honestly. James Carville went as far last night as to blame George Bush for Obama’s current problems in Syria. You get the Government you deserve. We in the States put this man in power, twice.

We have complete economic collapse at home, and expanding death and destruction over sea’s that can be laid directly at his feet. Yet those who support him refuse to even acknowledge Obama’s part in any of  it, while they blamed Bush if they caught a cold during his Presidency, and still today they blame him.

Now I ask how can one President be responsible for everything that occurred under his term while another is held responsible for nothing? And you people that support him want to be taken seriously.

28 thoughts on “But they were going to love him”