DAVID STOCKMAN: BACK O’ THE NET

MEANWHILE, IN THE LAND OF THE FREE

DIMON: BOND MARKETS WILL TURN AGAINST US

THE KING HAS LOST HIS CROWN…

Dubai World Ports has berthed in the Thames. 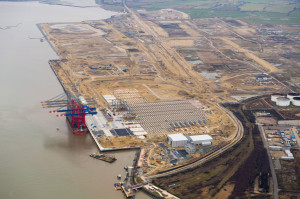 £1.5 billion investment brings the largest cargo ships in the world to berth and offload their container cargo at this monster cargo facility, 30 miles from London.

They dredged a new deep channel 75 miles out along the Thames Estuary, took all the sand and soil, and made a new port, and all with Dubai cash and capital. Why? Because they will make millions servicing the ships coming from the Far East, laden with imports which used to be made here, before we lost our ability to do things ourselves!

The giant cranes, being offloaded in this photo, will service ships such as the Maersk Moller, along with 18,000 containers, featured in the linked videos and documentaries.

True, there will be exports as we, as a nation, aren’t completely dead in the water, but the largest export component will be empty containers, returning to Shanghai.

My point is quite simply to comment that these cranes, along with the massive and totally-impressive ships which will lie under the cranes, could all have been built in Britain. 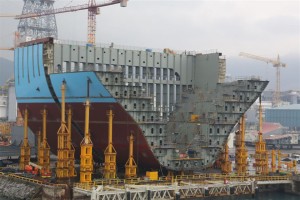 If you watch these documentaries, you will see the South Korean workforce build this huge vessel, fit her and float out in 38 weeks. Then they will get started on the next nineteen ships, all for the Maersk Line. We could have built them all, if we had not had an entire industry crippled by successive Governments, crucified by Unions intent on getting ‘more’ for their members; alowing europe to tell us what we canand cannot do; but making Britain a place which did not welcome business.

Take five hours, search and locate the whole series, and find out how they do business, build the most impressive things in the world, buy from those who wish to sell, and compete in this fiercely competitive world.

40 thoughts on “Not everything Arabic is threatening”