what comes for us all

Not the ‘look how well we’re doing’ letter time again!

An argument, and a memory 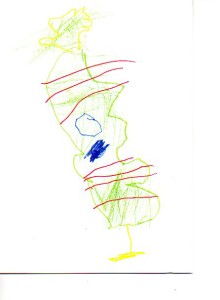 As I gaze at my mantelpiece this afternoon, crowded as it is with family photos and Christmas cards  from old friends and family, my eyes are drawn, again and again, to one particular card. It is not glossy, or covered with tinsel, or even featuring holly, sleighs, reindeer or a slightly-mythical bearded figure all dressed in red, trimmed with white fur.

Instead the cover of this small card comes with the imprint of a small boy’s idea of the outline of his Grandfather’s head ( I think) and he struggled with where my ear should be, because he scribbled over the first position and settled for a new one.

I know that the spade work is done by computer graphics, along with micro-electronics, but this card says all there is to be said at this time of year. My grandson Marco Michael wrote his name beneath those of his Mummy and Daddy, and who can argue with the innocence of childhood?

To all those who read these words, and who have read my posts throughout the past year; I hope and wish that you have the peace and happiness which comes with true contentment, and that you all have a truly Happy Christmas, and a peaceful and prosperous New Year.

3 thoughts on “A card with a difference.”