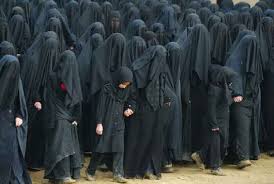 Readers will know I have been in FAVOUR of banning the garb of Islam from the public square. I’m not alone in wishing for this..

Jeremy Browne, a Liberal Democrat, said there needs to be a national debate about whether the state should step in to protect young women from having the veil “imposed” on them. Mr Browne said he is “instinctively uneasy” about banning behaviour, but suggested the measure may still be necessary to ensure freedom of choice for girls in Muslim communities. The Home Office minister is the first senior Liberal Democrat to raise such deep concerns about Islamic dress in public places. A growing number of Conservative MPs also want the Government to consider a ban.

The way I see it, Burqa/Niqab chic is not so chic and is an imposition, incompatible with OUR western values. If Muslim ladies (and children) want to wear such INDOORS, so be it. But not in the public square which is why I urge for the ban!

One thought on “BAN THE BURQA”