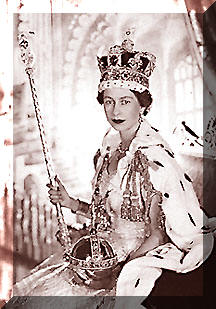 ATW’s COMMENTARIAT may – incredibly – include those who regard me as a bit of a nutter where the Queen, the British Constitution and the destruction of the Sovereignty of the British people is concerned. Yep, I have something of a bee in my bonnet on this and with good reason; our great nation has been subject to a coup d’etat. A slow motion coup d’etat it has been, but it is no less of a takeover by a foreign, hostile power for that.

How gratifying it is then to see that I am not alone. Archbishop Cranmer has a few words to say about the Treason committed by those in high office and the negligence of the so-called Monarch who is obliged by oath and law to defend our sovereignty (my emphasis):

One of the most significant aspects of the treaties of Rome, Maastricht, and Lisbon concerns the constitutional position of the Monarch. During her reign, Queen Elizabeth I stated: ‘To no power whatsoever is my crown subject save to that of Christ the King of Kings.’  Section Three of the Treason Felony Act of 1848 asserts that condemnation is incurred ‘If any person whatsoever shall, within the United Kingdom or without, compass, imagine, invent, devise or intend to deprive or depose our most gracious Lady the Queen…from the style, honour, or royal name of the imperial crown of the United Kingdom.’

The Treaty of Maastricht made the Queen subject to the European Union and a citizen of that Union. As a citizen of a different political entity and being subject to past and future judgements of the Court of the European Communities in Luxembourg, from which there is no appeal, her role as a constitutional monarch has been put into doubt. By the treaty, this Court was confirmed in authority over her courts, in which she was not previously arraignable. Her status as a citizen of the EU has rendered her, like the rest of the British people, ‘subject to the duties imposed thereby’.

Quite, Your Grace. The Treason Felony Act was drafted specifically to protect the position of the Sovereign and is still in full effect.  The style, honour, or royal name (King/Queen) bears no division. Like the state of being pregnant or the concept ‘unique’, one is or is not. The Queen is only so because she is the embodiment of the sovereignty of the British people and it is this embodiment that confers legitimacy on Parliament, via ‘the Crown in Parliament’.  If the British people are no longer sovereign, then Elizabeth Windsor can be Queen no longer.

Well said, Your Grace. No other conclusion is possible. The fulcrum of the British Constitution is that our sovereignty is vested in the Monarch. Remove that principle, or declare that Britons are no longer sovereign in their own land, all the rest crumbles.

Her Majesty the Queen has received petitions from the Lords, thousands upon thousands of letters from her subjects, and sworn affidavits withholding and withdrawing allegiance and obedience to Her Majesty, her heirs and successors, until such time as she is free to exercise her lawful authority.

And still she gives her assent to a Bill about which she can be in no doubt with regard to its contentious nature, the illegality of its implementation following the Irish rejection, or its illegitimacy under our Common Law birthright.

To those who will cite the ‘convention’ that the Queen acts on her Ministers’ advice, Patrick Vessey deals with that over at the Libertarian Party UK blog:

This is mere precedent, however, not Constitutional fact. Her Majesty does indeed have the authority to withhold Assent, as this is one of the reserve powers fully vested in the Monarch.

Absolutely. There are those who also raise the dread spectre of a ‘constitutional crises’ if Her Majesty were to tell her Ministers that she is bound by law and oath to protect and uphold the British Constitution, to govern in accordance with the laws and customs of we, the People, from whom the Monarch and Parliament derive there power. Well, here we are, a subject people of a foreign, hostile power, subject to foreign courts and foreign laws with a puppet Parliament and a Queen rendered suzerein – we already HAVE a constitutional crises!

King Harold lost his Kingdom a thousand years ago on Senlac Hill, but at least he put up a fight. Queen Elizabeth II simply signed it all away on the advice of traitors. It cannot be said that she was duped or ill-prepared for her role. She was rigorously schooled in the fundamentals of our Constitution when young. Patrick Vessey at LPUK goes speculates as to why she has behaved in this way by quoting one of our better commentators on the Monarchy, Dr David Starkey. His conclusion is one that I’ve long suspected also, that for all the style and grace with which she’s represented us, the Queen just isn’t that interested:

Her lack of curiosity extends, [Starkey] thinks, to the history of the monarchy itself. In 2003 Starkey was asked to curate an exhibition on Elizabeth I at the National Maritime Museum. After it was hung, he had lunch with the Queen. It was not a success for either of them. She was piqued – as he tells it – because her gin and Dubonnet did not arrive quickly enough; he was piqued because she showed no interest whatsoever in his show. It took him a while to work out why. "I didn’t realise that she had no interest whatever in her predecessors. Her history begins with her great grandfather. That is it. It really is it."

As I said, she is the Worst Monarch Ever. If she cannot bring herself to face down her ministers and defend the sovereignty of the British people, she ought to confirm her abdication and let us continue without her.

13 thoughts on “The Worst Monarch Ever”