The people of the UK to the polls on 22nd May to vote in the European Parliament elections. The UK Independence Party is unique insofar it has clear agenda of REMOVING the UK from the EU and I suggest to you it will do very well indeed. This means that the status quo may be challenged and a cosy EU consensus disturbed. Hence stories like this are to be expected as we approach the day of the poll…

UKIP leader Nigel Farage has defended a poster campaign claiming millions of Europeans are after British jobs as “a hard-hitting reflection of reality”. The posters – with messages including a warning British workers are “hit hard by unlimited cheap labour” – come ahead of May’s European elections. UKIP leader Nigel Farage will launch UKIP’s campaign for the European and local elections later in Sheffield. Labour MP Mike Gapes attacked the UKIP posters as “racist”. 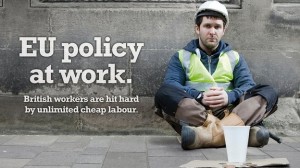 “Racist”? Eh? Which “race” is being targeted then..the WHITE race?

The Lib/Lab/Consensus know that a drubbing is coming and this is all about throwing mud in the desperate hope that some may stick. Nigel Farage will be painted as a demon in the weeks ahead but I for one wish UKIP well. I don’t agree with all their policies BUT they offer a little hope.

28 thoughts on “OPERATION – GET UKIP”